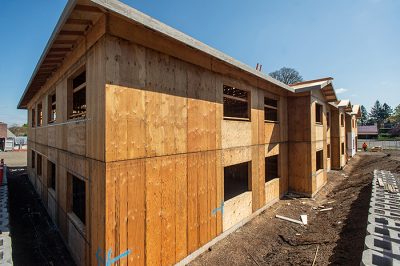 A new development in Oregon City will provide affordable housing for military veterans struggling with low-wage employment and even homelessness.
Known for now as Pleasant Avenue Veterans Housing – it will be named after a local service member upon completion – the building will provide 24 apartments for persons with incomes at or below 30 percent of the median family income. Northwest Housing Alternatives, a nonprofit, is developing the project for the Clackamas County Housing Authority. The two-story building was designed by KASA Architects and is being built by general contractor Walsh Construction.
“It’s open to veterans from all over; they’re not restricted to Clackamas County,” Clackamas County Housing Development Coordinator Angel Sully said. “The county has a long-standing relationship with NHA, so when we were approached by them and their former director it just seemed like a good fit; it just checked all the boxes we needed.”
The building will hold 12 one-bedroom units, eight two-bedroom units and four studios.
Crews broke ground in mid-January and currently are nearing completion of wood-framed interior and exterior walls and roofing. Mechanical, electrical and plumbing work is just getting started.
“We’re right at the tail end of framing, and in the next couple of days we’ll have the roof sheathing all done,” Walsh Construction superintendent Bryan Ware said. “The roofing and siding will start next week, and with windows there will be a very quick transformation. But right now the project is tracking really well. We’ve gotten some lucky breaks with the trades.”
The project is one of the first for Walsh using its new Cost Efficient Design Construction methodology, which seeks to minimize construction time and cost through design and material efficiency. Here, those efficiencies are being realized both through the use of panelized exterior and interior wall systems, as well as a design that avoids complex angles and shapes.
“The entire project is prefabbed and panelized,” Walsh Construction project manager Brandi Pine said. “It’s got the two-foot spacing, which is not totally common on a wood-framed structure. The entire project was panelized, and it took us two weeks to stand all the walls and then it’s been another week and a half to do the roof; so it’s been extremely fast framing.”
The wall panels are manufactured by Pacific Wall Systems, which has plants in Central Point and Tumwater, Washington. The wall systems come in a wide variety of configurations ranging from bare studs to nearly complete walls with drywall, window openings, weather barrier, and plumbing and electric fixtures.
In this case, Walsh chose to use exterior wall panels sheathed with DensGlass weather barrier. The interior consists of basic stud walls, some of which have plywood sheathing.
The biggest advantages are the time saved and the need for fewer on-site carpenters.
“It’s definitely faster when you panelize, regardless of how many people you have,” Pine said. “There are not a lot of wood framers too, so this was the perfect storm in terms of a lull in the workload. Being panelized, they were able to stand almost half a floor in a day.”
For context, the entire building consists of 18,000 square feet of floor area over two stories. That kind of time savings means completion will be reached in less than a year; tenants are expected to begin moving in at some point after Thanksgiving.
“This is the second veteran project that NHA has done,” Northwest Housing Alternatives’ Nikolai Ursin said. “The first was Pomeroy Place, which was opened a couple of years ago in unincorporated Washington County. There’s a veteran preference on the lease-up policy, so people who sign up to be on the wait list, if they’re a veteran, then they get bumped up the list.”
“We’re functioning as a turnkey developer for them,” Ursin said. “As we convert to permanent financing, the Housing Authority will purchase the project from us and then they will continue ownership and operations for the next several decades.”