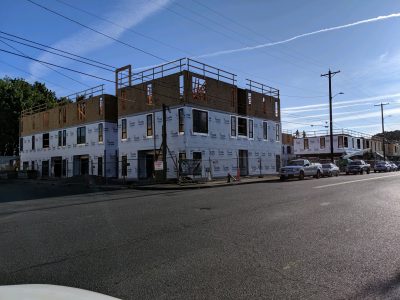 Several months after installation of a massive dry well, construction of the Argyle Street Apartments, in Portland’s Kenton neighborhood, is in one of its busiest stages.
Crews are framing walls, installing mechanical and electrical and plumbing systems, placing windows, and wrapping the building with a weather barrier expected to help the project gain Earth Advantage gold certification.
Walsh Construction is the general contractor for the affordable housing project at 2133 N. Argyle St. REACH Community Development Corp. is developing the project, which was designed by MWA Architects.
Use of prefabricated wall panels by Pacific Wall Systems of Olympia, Washington, has significantly reduced the number of carpenters needed, according to Rascoe. Instead of a crew of 30 to 40 carpenters framing walls by hand from scratch, barely half that number are not only framing walls, but also installing joists and sheeting walls, he said.